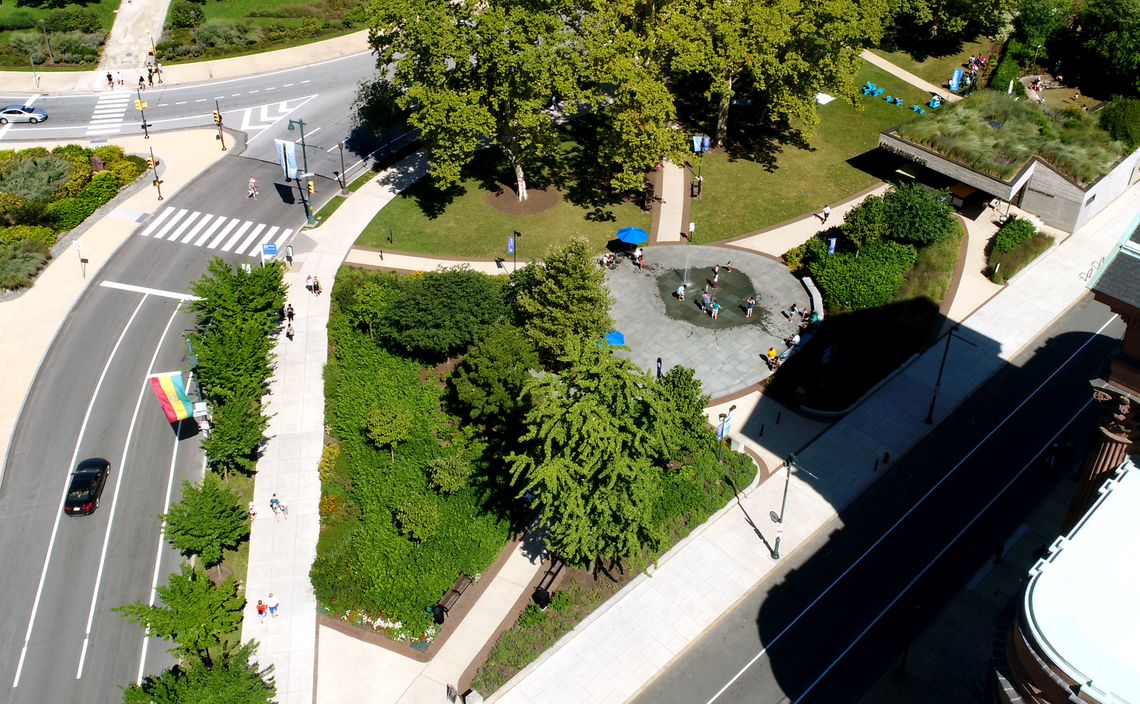 In the Logan Square neighborhood of Philadelphia, we spotted the Grow Up Green 2021 Butterfly exhibit at Sister Cities Park. 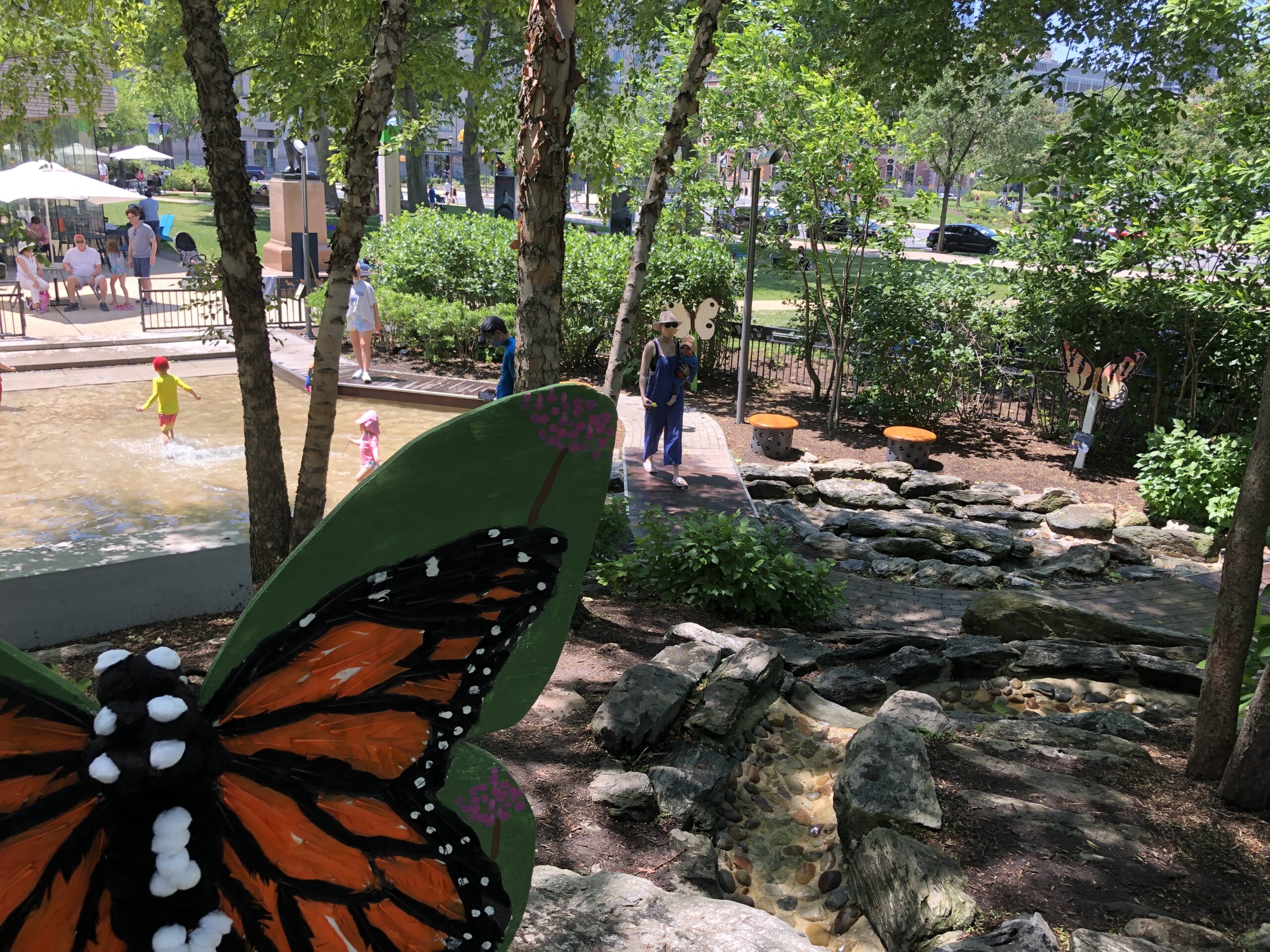 Among the painted Monarch and Cabbage White butterflies was a Spotted Lanternfly piece, with the warning: “Not a Butterfly! STOMP THIS INVASIVE BUG! 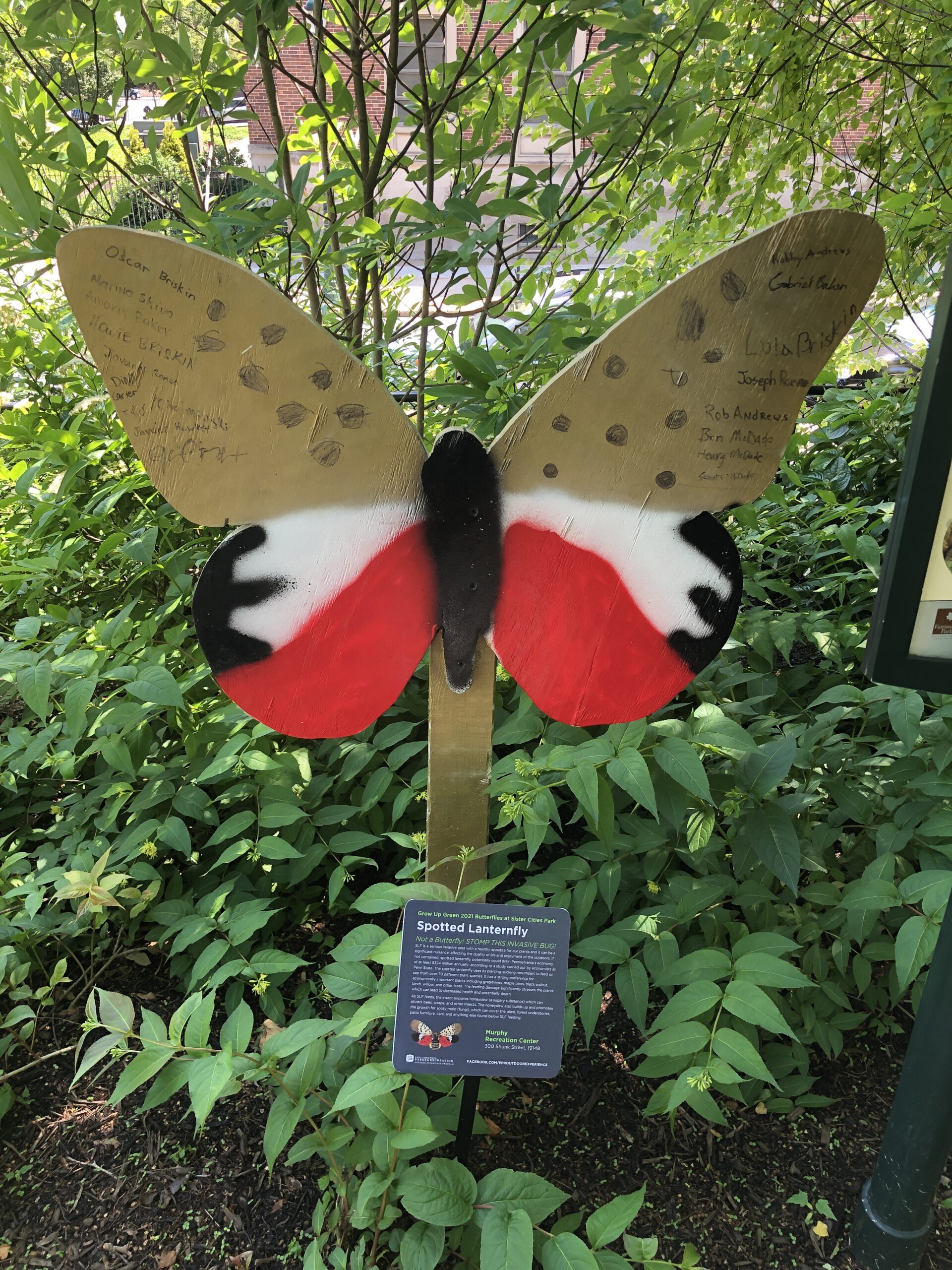 The trademark gold, red, black, and white wings of the art piece were signed, presumably by the artists. A placard beneath gives plenty of detail about the SLF, which we’ve transcribed below. 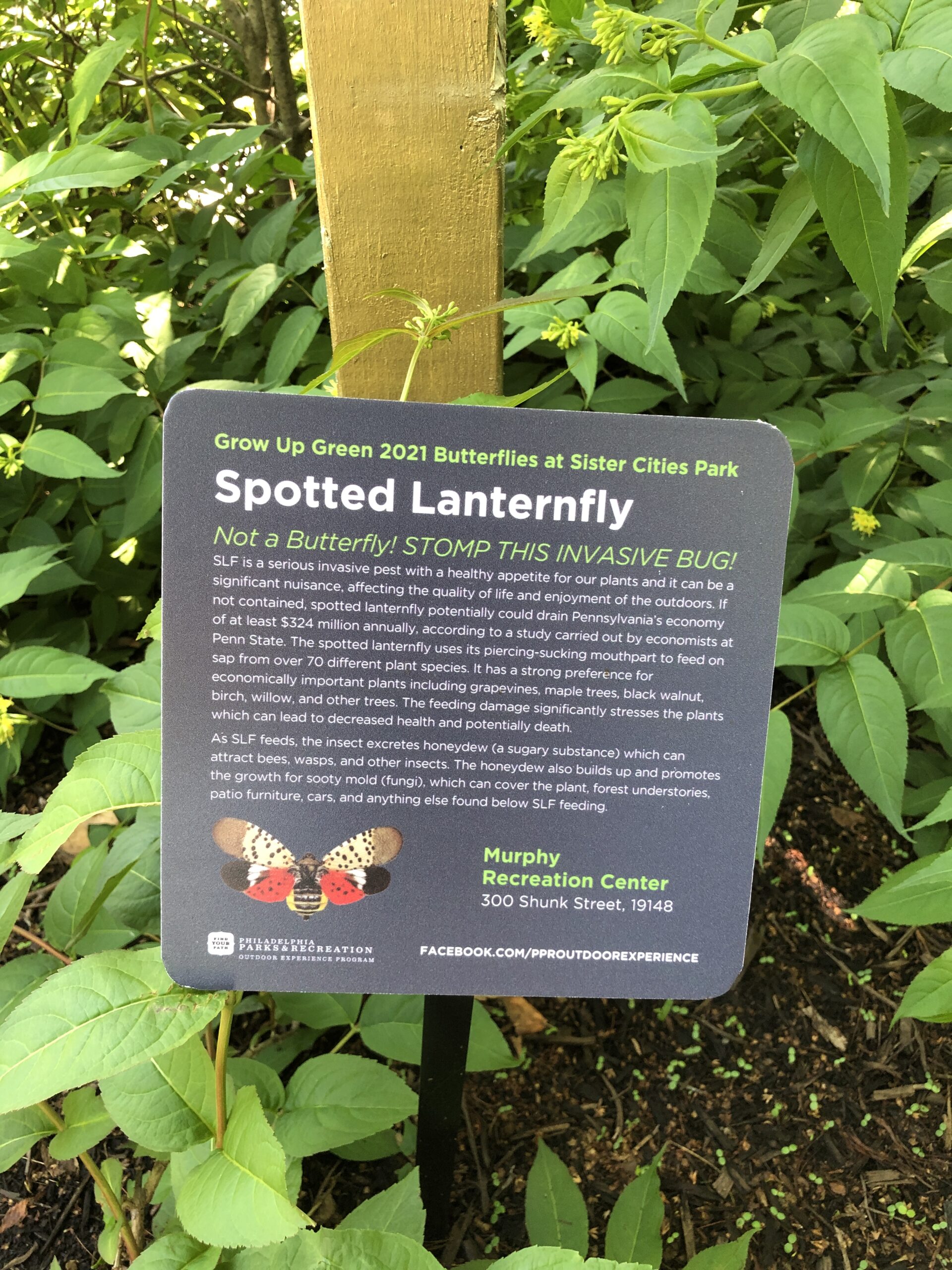 SLF is a serious invasive pest with a healthy appetite for our plants and it can be a significant nuisance, affecting the quality of life and enjoyment of the outdoors. If not contained, spotted lanternfly potentially could drain Pennsylvania’s economy of at least $324 million annually, according to a study carried out by economists at Penn State. The spotted lanternfly uses its piercing-sucking mouthpart to feed on sap from over 70 different plant species. It has a strong preference for economically important plants including grapevines, maple trees, black walnut, birch, willow and other trees. The feeding damage significantly stresses the plants which can lead to decreased health and potentially death.

As SLF feeds, the insect excretes honeydew (a sugary substance) which can attract bees, wasps, and other insects. The honeydew also builds up and promotes the growth for sooty mold (fungi), which can cover the plan, forest understories, patio furniture, cars, and anything else found below SLF feeding.

According to the Pennsylvania Department of Agriculture:

Property owners can help contain and control spotted lanternfly (SLF) by implementing a management strategy using a combination of mechanical control, host reduction, and chemical control. These guidelines have been developed for use by the Pennsylvania Department of Agriculture (PDA) Spotted Lanternfly Eradication Program. The guidelines target SLF at different stages of its lifecycle, and may lead to dramatic reduction in SLF populations where implemented.

Here we discuss these different strategies and review products that can be used for them.

From October to July, mechanical controls such tree banding are recommended. Starting in April, adhesive bands can be wrapped around your trees, six inches wide, at about chest height. Push pins can be used to secure these bands. These bands are effective at trapping the first three nymph stages of the Spotted Lanternfly.

This is 10 inch wide roll that comes with 30 feet of adhesive paper that can be wrapped around your tree trunks. The reviews indicate it is highly effective for spotted lanternfly control.

Perfect for trapping Spotted Lanternfly. If you are in the northeast or mid atlantic, look out.. this could be you soon. These crazy pests have no predators as of yet. We have been using this tape to trap 1000s of nymphs and now adults. They are sapsuckers that destroy grapevines and trees. This fly trap does an amazing job. We are on our second roll and we have a third on standby for next year.

Works wonders!!! I got this primarily to wrap around my backyard maple tree which is completely infested with spotted lanternfly nymphs. So far, it has killed hundreds, if not thousands of them. However, the process of wrapping the flypaper around the trunk of the tree is one of the most difficult tasks I’ve ever tackled. This material is the stickiest stuff on Earth and will stick to EVERYTHING it touches. But, it works wonders…great for mosquitoes, too! 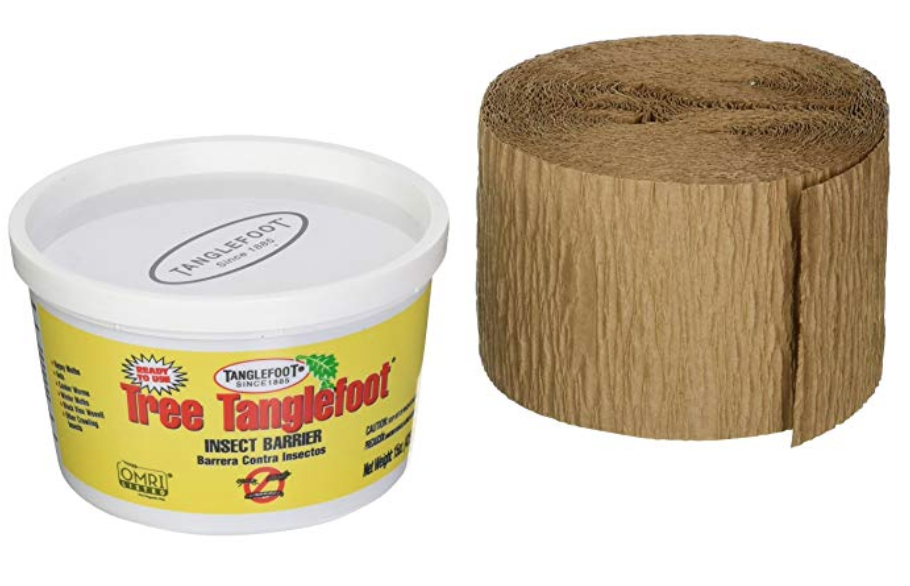 This is a similar wide band, but the wrap is first put on the tree, and then you must apply the sticky insect barrier to the wrap yourself. It’s one extra step and takes more work, but easier to handle and less likely to make a mess, so you decide.

We got this for the horrible spotted lanternfly infestation, on our silver maple tree, that started last year. After feverishly scraping what larva we could, my mother-in-law suggested Tanglefoot. From the time we wrapped and put the “sticky stuff” on, we have not seen one lanternfly above it. I think we have won the war on at least this one tree. I just hope others will help in the battle with protecting their trees.

Although, I feel bad for the ants, spiders, and other insects that i don’t mind, that can’t cross the barrier. You can’t win without a sacrifice of some kind.

Starting mid-May to August, insecticide treatments become effective since Spotted Lanterflies start to gather on trees, especially the tree of heaven. A bark spray is recommended since the Spotted Lanternfly must feed on the trees, and fewer other species are affected via this delivery. Keep applying pesticide every year until no more Spotted Lanternflies are detected in your property.

Among insecticide products, we recommend Bonide (BND939) Systemic Insect Control Spray. This comes in a 32 ounce sprayer bottle that can be attached directly to your hose for easy application. The reviews for using this to control Spotted Lanternflies are mostly positive.

Does a great job killing Spotted Lantern flies. My water pressure in my hose wasn’t strong enough for my tall maple trees. I mixed it into a 2 gallon pump sprayer 8 ounces to 2 gallons of water. The nasty critters started dropping off almost instantly.

When a species invades an ecosystem, it usually means trouble. Ecosystems are a complex web of species that feed off each other in a balanced manner. This delicate balance can very easily be disrupted by the introduction of a foreign species into the ecosystem.

This is the reason transporting living non-native species of animals or even birds into different ecosystem is extremely harmful for the balance of the food web. With no natural predators to keep the invader species in check, they tend to reproduce rapidly and damage the delicate ecosystem.

An example of such an invader is the spotted lanternfly.

What are spotted lanternflies?

These are essentially insects that are native to Asia, Australia, Africa, and South America. They are plant feeders. They use their sharp beaks to suck the juices from stems and leaves.

In their native continent of Asia, they are eaten by birds and small mammalian predators. This keeps their population in check and reduces the damage they cause. The Ailanthus, a tree that is very widely exported around the world, is the insect’s preferred host tree for egg laying.

It is possible that these insects were brought to the United States via trade of the Ailanthus tree.

Why they are bad for us

Without natural predators to control their population, these insects are spreading like wildfire. They are growing in numbers and becoming harder to contain. They attack crops and produce, causing huge losses to farmers.

When this species invaded Korea in 2004, it ended up spreading to the entire country and hitting their extensive peach tree orchards hard, causing immense damage to the industry.

These insects were first found near Philadelphia, PA in 2014. State and Federal authorities, quickly swung into action, realizing the potential harm to Pennsylvania’s fruit and timber industry. Checkpoints were set up at county borders to ensure no spotted lanternflies were hitching a ride. So far, the USDA alone has spent nearly $18 million to try to contain the threat.

The invader, however, has proven to be a huge problem. By 2018, most of south eastern Pennsylvania was infested. They had even spread to surrounding areas like Virginia, Maryland, Delaware, New Jersey, and New York.

What efforts are being taken to control the infestation?

Despite the checkpoints and quarantined regions and other such precautions being taken, these insects have spread exponentially. To fight this, wildlife officials are examining a tiny parasitic wasp, Anastatus orientalis, which kills a huge number of the spotted lanternfly’s eggs and nymphs in its native country China.

Studies are being made to see if they can be introduced to the American wilderness without causing harm to native North American wildlife. Another option being studied is the removal of the Ailanthus trees that the lanternflies prefer to lay eggs on.

So what should one do on spotting one?

These insects are harmful to the environment as they are an invasive species. They also cause damage to crops and thus, affect the economy. So, the Pennsylvania Department of Agriculture recommends destroying their eggs by scraping them off the tree trunks on which they are laid. The department also suggests exterminating nymphs and adult lanternflies by setting sticky traps on the base of trees and using pesticides.

Ultimately, we need to take the offensive against these invaders otherwise America will suffer.