The Somerset Spotters are spreading awareness about the Spotted Lanternfly as part of the Lexus Eco Challenge. Check out their inspired music video below!

The same group earlier created a Spotted Lanternfly piñata to gleefully destroy. What an amazing idea!

A spotted lanternfly pinata that one of my team-mates made! Music video coming soon! Please share so our group gets out there! #lanternfly #killthembugs pic.twitter.com/L8SXsJR1MN

Check out the song below, or support the artists by buying the mp3 from Amazon Music.

The Mummers Parade is a long-standing New Years Day tradition in Philadelphia, where local clubs dress up in fancy costumes and strut their stuff and have done it since 1901. We were pleased to find representation for the Spotted Lanternfly at this year’s event, with a group donning picture-perfect costumes made with red, gray, and gold fabrics and foam insulation tubes. They’re doing their part to raise awareness, wearing signs that say “Swat” and “Plant Trees”. Check out the photos from the corner of Catherine & Broad below. 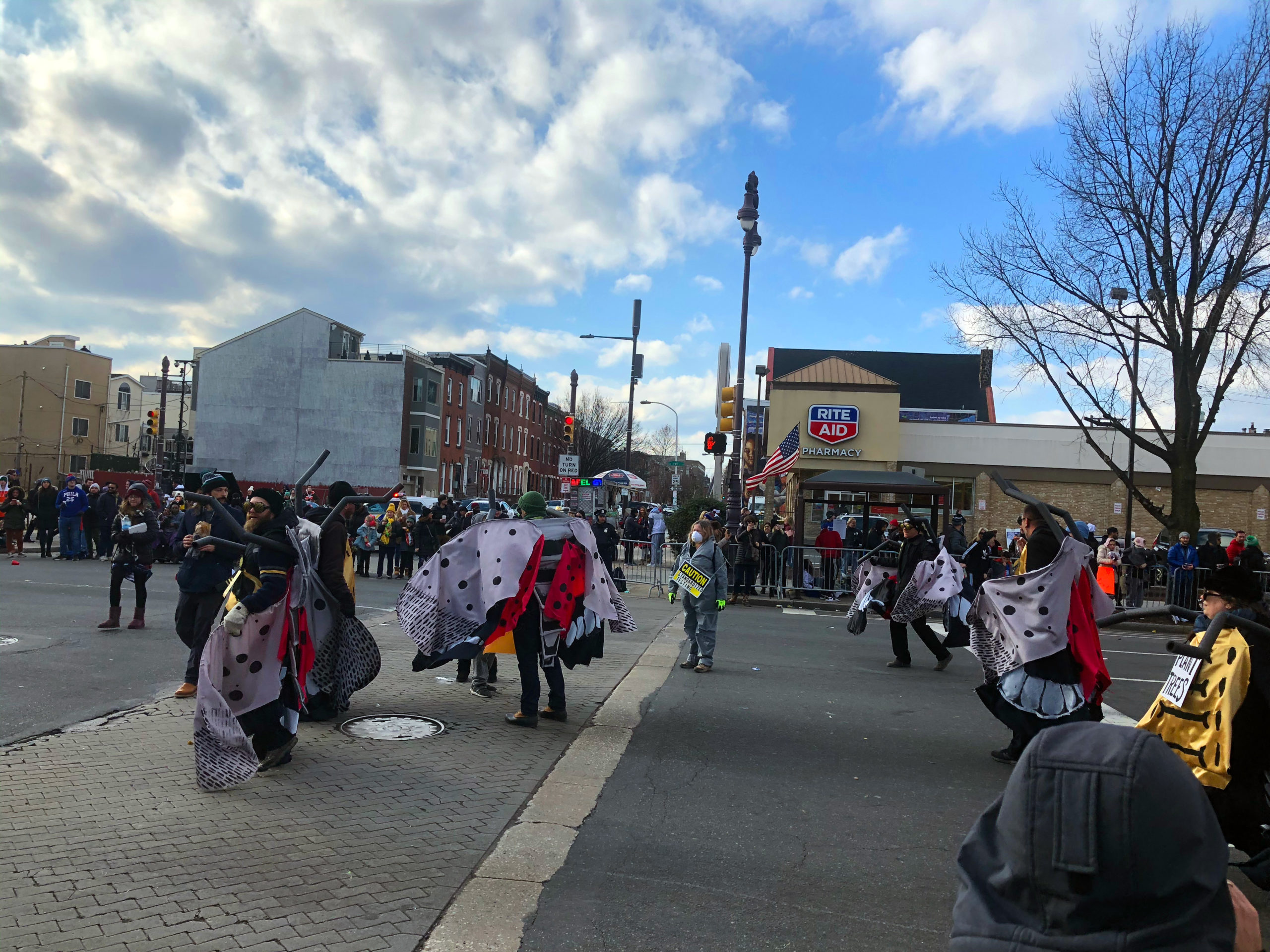 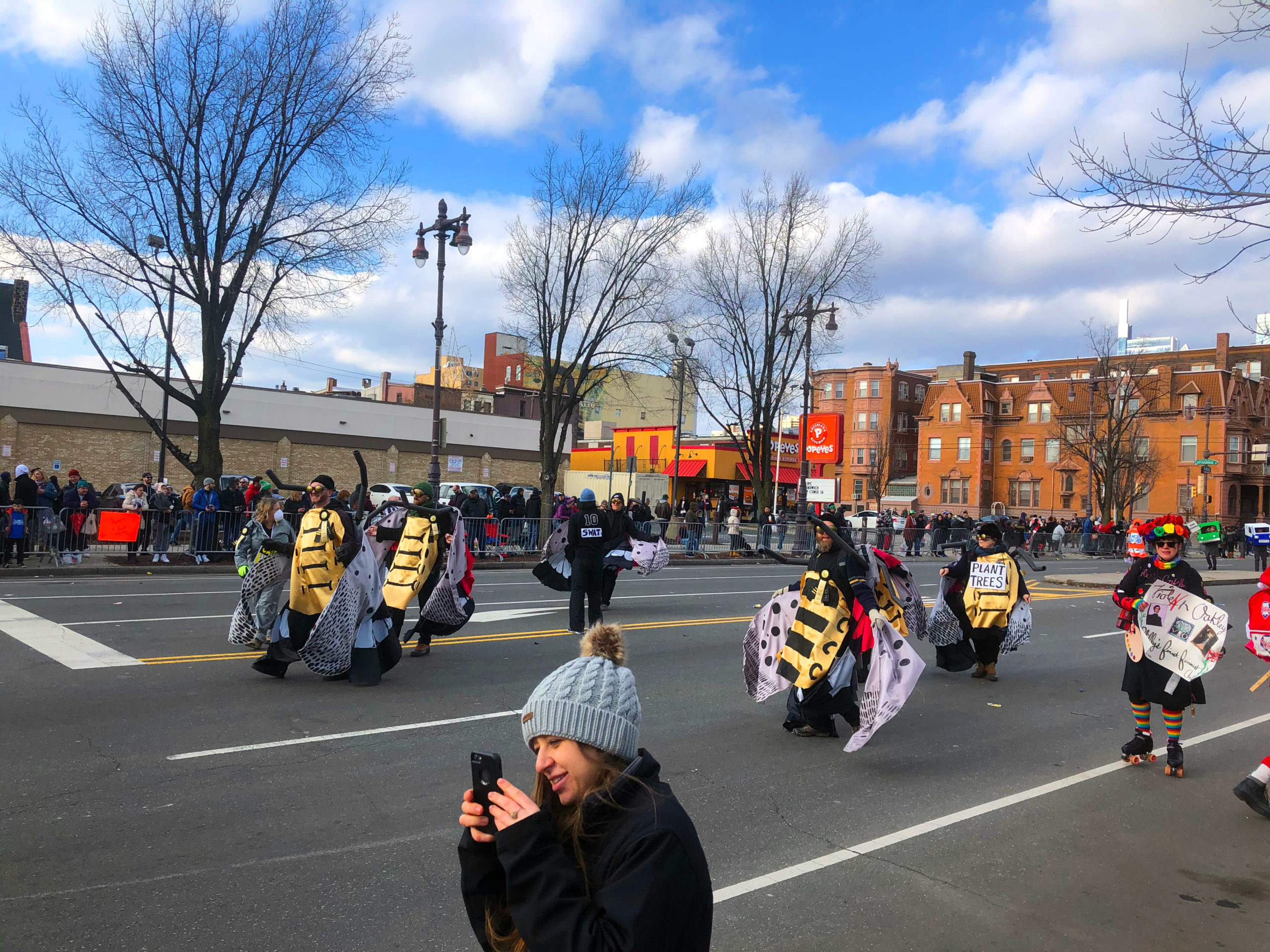 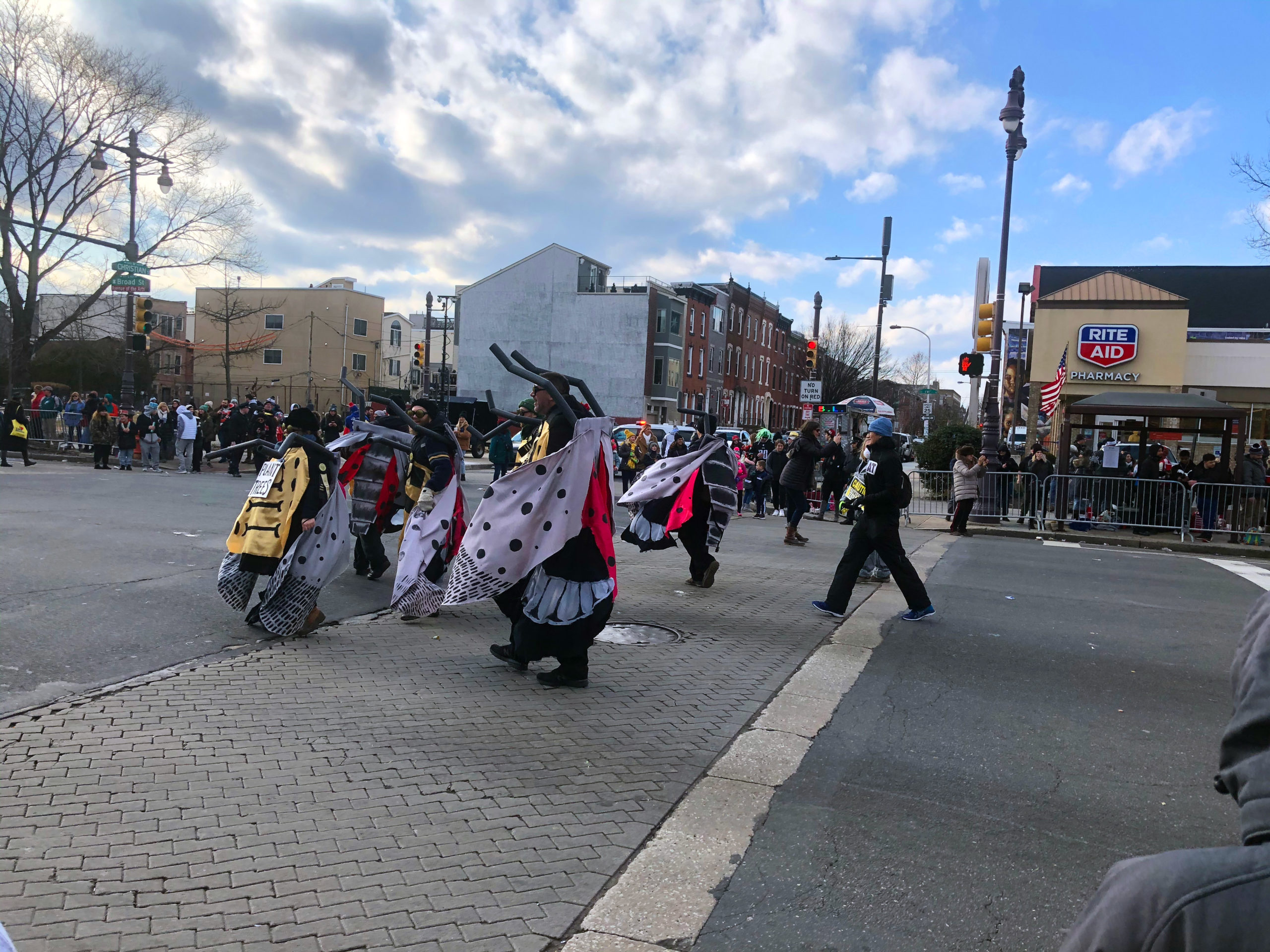 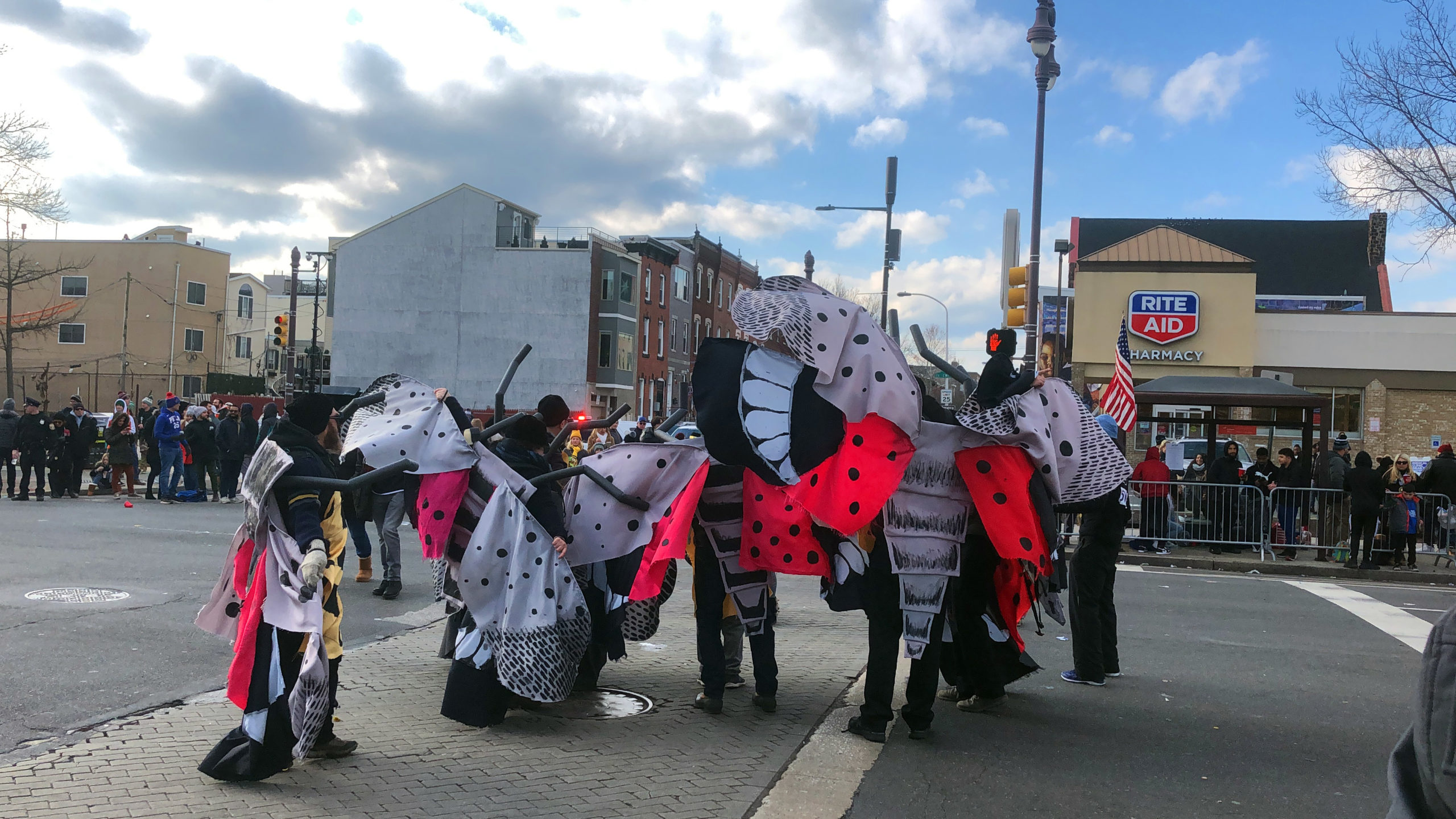 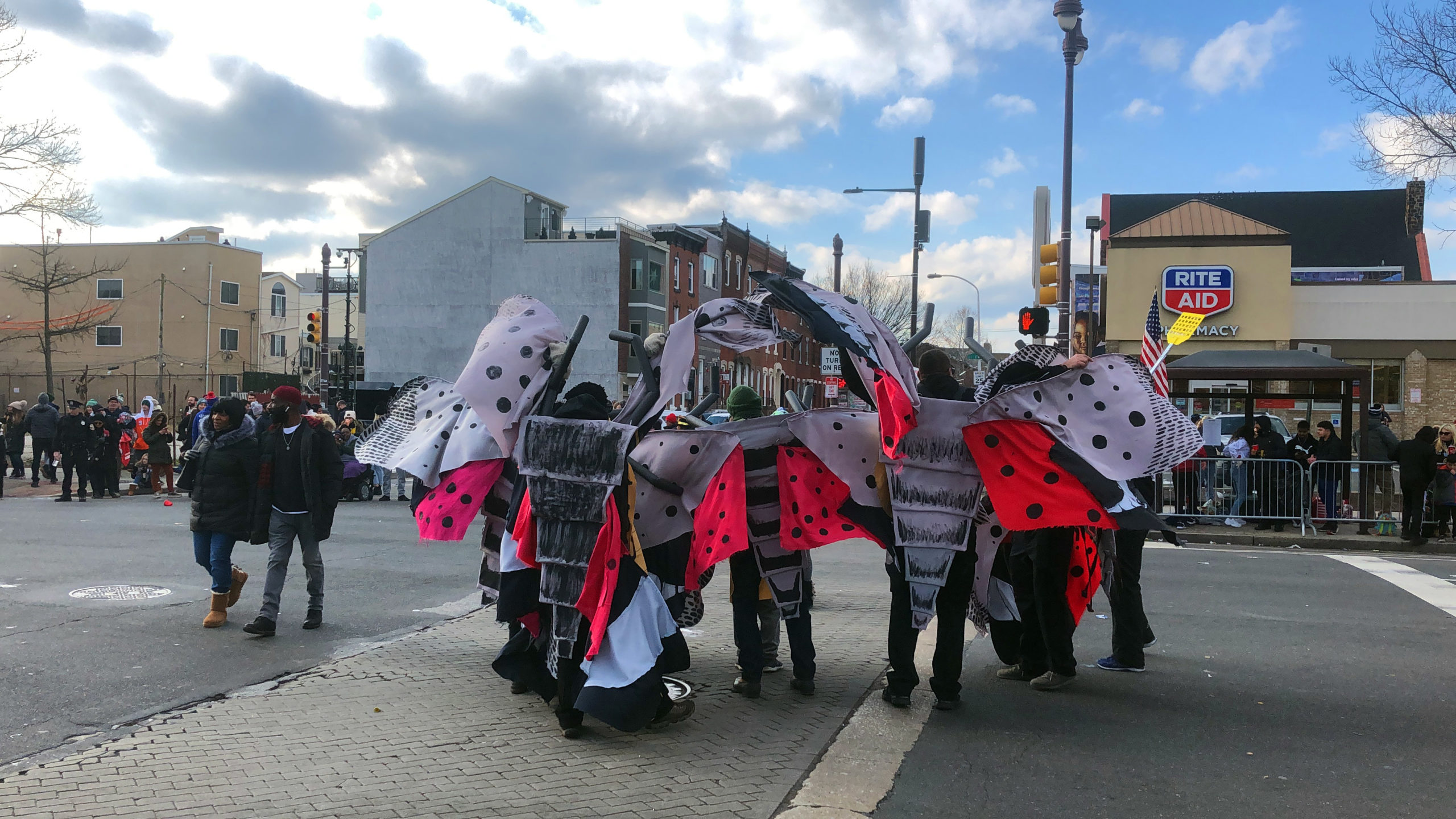 I made a big mistake. I mean a really big one.

In the summer of 2019, I sat down at a table filled with big wigs from the Department of Agriculture and representatives from multi-million dollar corporations. Looking around, I can tell they didn’t want to be here. I can also tell that they didn’t believe in my gift. But there is something else I see in their faces…desperation.

I realized that I was different was when I was about 5 years old I had been playing in my grandmother’s yard. There was this huge amazing tree that seemed tall enough to reach heaven. I can still feel the rough bark under my fingertips and just when I was just about to start to climb, I felt something. I don’t know what it was really. An alarm of sorts. I pulled back my hand fast and just before the Black Widow spider that hadn’t noticed tried to bite me. I was so scared that I ran inside and didn’t tell anyone.

I tried to ignore what had happened even avoided my favorite tree. But I learned the tree wasn’t special. It was me. I was able to understand trees. And plants too. I could sense what they needed and give it to them. My mother thought that I had a green thumb. When I finally told her my secret she just sat at the dinner table blinking at me.

I showed her and something turned on in her brain. She gave me a big smile and told me how wonderful I was.

It started with neighbors bringing their dying plants over to find out how to fix them and ended up with my mother running an agricultural consulting business where a fifteen-year-old me would tell our clients all about their plant’s woes. For a fee of course.

It was profitable and I even ended up on television news shows. Some people were skeptical about my gifts, but enough people believed that my family was able to live more than comfortably.

Back to the meeting. In front of me spread out on the conference table were stacks of glossy photos showing trees covered with these moth-like insects. The Spotted Lanternfly looked harmless but they were a menace. They were destroying millions of fruit trees back in the eastern U.S. which was costing a lot of money for the government and some very big corporations. It was bad and only looked like it would get worse. Some doomsday shit. They tried everything but nothing seemed to be able to kill them. They were desperate and willing to go the less traditional route. I smiled back at them.

“Take me to these trees.”

It was unreal. There wasn’t a tree that wasn’t covered with the Lanternfly. Disgusting goo dripped from them and we had to wear raincoats to protect ourselves. Looked like black mold growing on some of the trees. I touched a tree and the feelings were so strong that I stumbled to the ground overcome with emotion. The tree was in agony. It was being eaten alive by these creatures.

I placed my hand against the bark again pushing my thoughts forward looking for a way to help. The response was immediate.

“We will tell you how to destroy them.”

The big wigs were more than happy with the information provided by the trees. I’m pretty sure that most of them rationalized that I was some kind of genius that just liked to put on a show. Whatever they thought, they quickly took action.

Within a month new plants had been genetically altered and planted near the infected plants and the Spotted Lanternfly quickly ate them up. Within a few hours, the ground was covered in dead insects. The government was ecstatic with the results and more of the new plants were shipped to the affected parts of the U.S. with the same results. Other countries begged for help and the United States sent them the plants after they agreed to some new trading agreements of course.

It seemed that all of the Lanternfly had been eradicated and people were happy. At least for a while. Then the calls began. The new plants were growing rapidly and their roots were strangling the roots of the other trees and plants. The roots were starting to break through pipes and even concrete, so thick, deep and spread out that they couldn’t be dug up. It was estimated that if they went unchecked that the results would be devastating to the world.

I went to my grandmother’s house where a new plant had its trunk wrapped tightly around my old climbing tree’s bark choking the life out of it. I touched the new tree hoping for a solution. It seemed happy to communicate with me, grateful for my help. I pushed the images of destruction forward in my mind and I spoke out loud.

“You are destroying everything. Humans won’t be able to survive if you keep growing. Please help us.”

The tree seemed to find great humor it this and sent me memories of generations of wars between these trees and the Lanternfly with each side trying to destroy the other. Feelings of disgust pulsate as I saw visions of the insect and then overwhelming glee at the view of billions of their dead littering the ground. Then the vision of the world completely taken over by the plants.

I fell to the ground, not sure what to do. I felt betrayed. But why? The plants hadn’t lied to me. I had never asked them any questions. Never judged their intentions. And had never looked for another option. It was all my fault.

Photo credit of Tree of Heaven by NatureServe.

The Spotted Lanternfly has an interesting life cycle you should be aware of if you intend to fight against them. We present the life cycle to you in pixel art form. 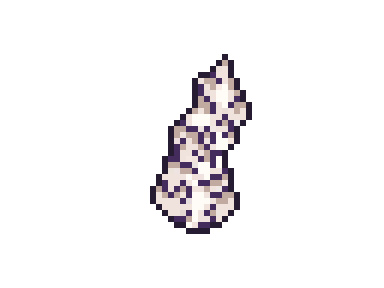 Spotted Lanternflies will have laid eggs in the fall to last through the winter. Their egg cases, which are a waxy yellowish brown, are usually located on tree trunks, stone, or any vertical surface, including manmade items like vehicles, outdoor furniture, or lumber. Their preferred place is the tree of heaven (Ailanthus altissima), itself an invasive species in North America. 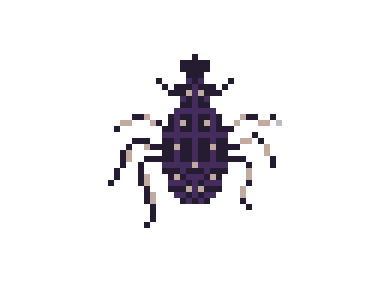 By late April or early May, nymphs begin hatching from the egg sacs. In the early stages (1st, 2nd, and 3rd instar), the Spotted Lanternfly nymph is wingless, and black with white spots. 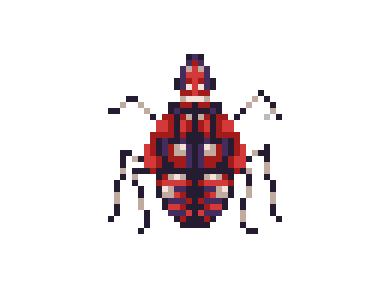 By July and August, we begin the see the late stage Spotted Lanternfly nymph (4th instar), which has some red patches mixed in with the black and white spots. They have a red upper body and red wing pads. They are still flightless, so they must crawl and hop from plant to plant to feed. 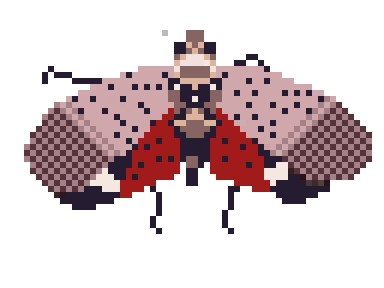 About September we begin to see the familiar adult Spotted Lanternfly at their peak. They have a black head, and gray wings with black spots. They begin to mate starting late September through the onset of winter. The adults lay their eggs on vertical surfaces, each egg case containing 30 to 50 eggs, and the cycle repeats.

We all know by now that the Spotted Lanternfly is wreaking havoc and destruction throughout the northeastern United States, but did you ever really stop and notice how much of an anime supervillain it is?

Above we’ve found footage of the Spotted Lanternfly leveling up its powers to over 9000, training for the next round of battle in fall 2020.

On the Philadelphia subreddit r/philadelphia, fall of 2019 was the season of the spotted lanternfly (for now). Dozens of posts were shared about the encroaching pests that have invaded all corners of the city, motivating its residents to do their part and stomp em out of existence.

r/philadelphia also shares some fun content about the bugs, including a Spotted Lanternfly Halloween costume by u/CMontgomeryBLerns: 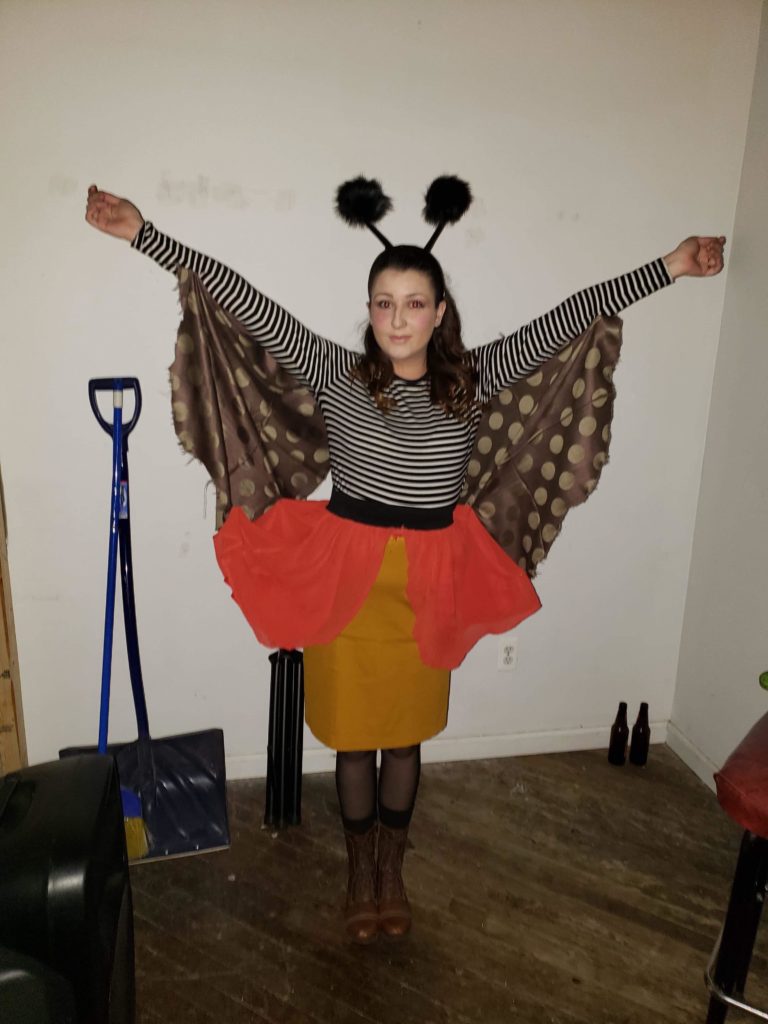 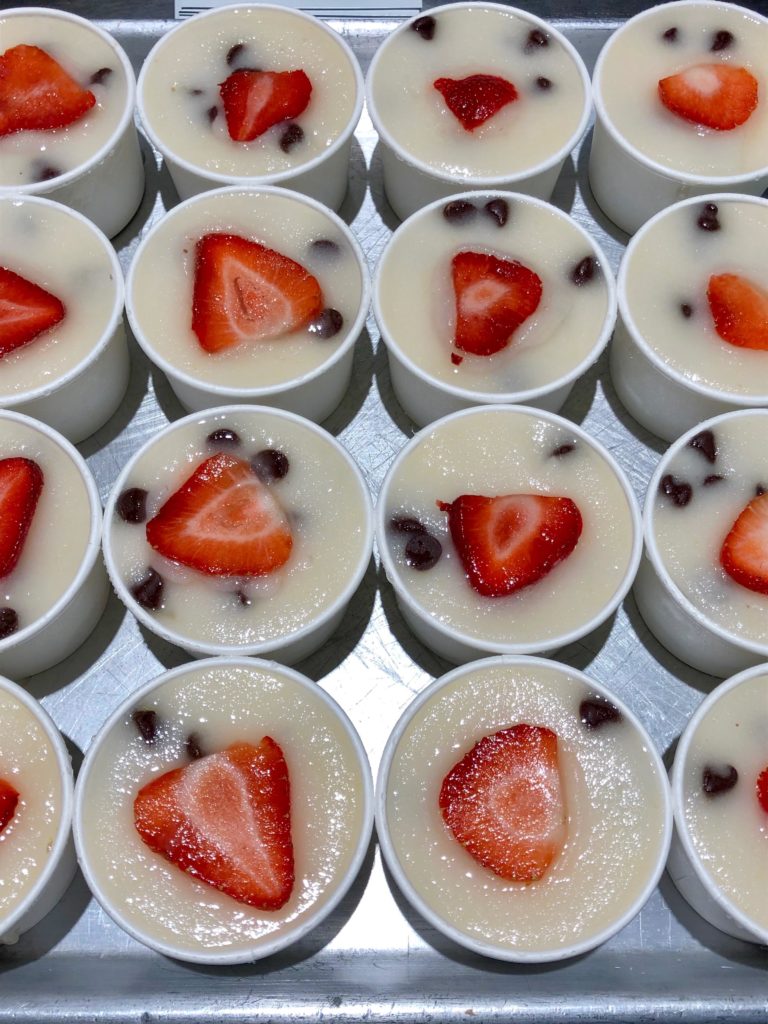 While the stompings have done little to curb the Spotted Lanternfly’s growing numbers, at the very least they’ve instilled in Philly’s citizenry, especially its Redditors, a communal sense of civic duty and pride.

You’ve been doing your part to kill them, squash them, just get rid of them. Now you can turn your civic work into a friendly competitive game. With Squishr, a free game developed by Bradley Line and available on the Apple App Store, you can record your squashings and see where you place on the leaderboard.

A nice side benefit of playing Squishr is that the data you provide about date, time, and location of your squishings will be shared with State Departments of Agriculture, allowing them to better understand the spread and range of this destructive species.